The Race to Resilience is a global campaign led by the Marrakech Partnership for Global Climate Action High-Level Climate Champions , launched in January 2021 to catalyse a step change in global ambition for climate resilience, putting people and nature first in pursuit of a resilient world where we don’t just survive climate shocks and stresses, but thrive in spite of them.

The campaign aims to catalyse action by non-state actors that builds the resilience of 4 billion people from vulnerable groups and communities to climate risks, by 2030.

Due to their key position between national and local levels, subnational governments facilitate coordination and policy coherence, innovate and develop ambitious plans and adaptation. They are at the forefront to catalysing changes that are crucial for long-term resilience and face the impacts of climate change, such as extreme heat, drought, flooding and sea-level rise.

Regions Adapt, the official platform to engage regions in the Regions Race to Resilience

(Information also available in our flyer in English, French and Spanish)

At the Paris Climate COP21 in 2015, Regions4 launched RegionsAdapt, the first global initiative that inspires and supports subnational governments in developing ambitious adaptation strategies, implementing concrete actions and transparently reporting on their progress. With more than 70 signatory members impacting over 300 million citizens, RegionsAdapt is mobilizing ambition on adaptation worldwide. 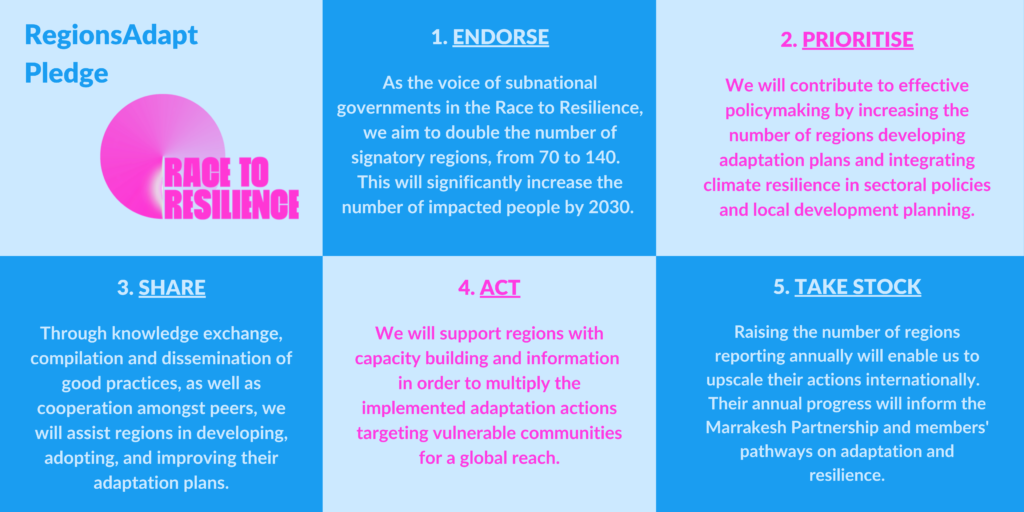 What do States and Regions commit to when joining the Regions Race to Resilience?

States and Regions who want to demonstrate their leadership on adapting to climate change and join the Regions Race to Resilience are invited to commit to the following pledges:

Benefits of participating in RegionsAdapt

Led by the High-Level Climate Champions for Climate Action Race To Zero, Race to Zero is the UN-backed global campaign rallying non-state actors – including companies, cities, regions, financial and educational institutions – to take rigorous and immediate action to halve global emissions by 2030 and deliver a healthier, fairer zero-carbon world in time. It was launched in 2019 and is the sibling campaign of Race to Resilience.

All members are committed to the same overarching goal: reducing emissions across all scopes swiftly and fairly in line with the Paris Agreement, with transparent action plans and robust near-term targets.Regions wishing to join the Race to Zero can contact Under 2 Coalition: www.theclimategroup.org/join-race-to-zero